iOS 8.4 Update Is Now Up For Grabs

The last major iOS 8 tune up has been released by Apple a couple of hours ago. You can now download and install the public version of iOS 8.4. As we previously announced, while beta testing this new version, the most important upgrade is the revamped Apple Music app, which comes with a full service that includes unlimited access to millions of songs, as well as the 24/7 airing Beats 1 Radio Station.

This is probably the last important iOS 8 release, before iOS 9 will be launched, this fall, along with the presentation of the iPhone 6S and iPhone 6 Plus flagships. To rapidly download iOS 8.4 on your device open Settings and browse to General -> Software Update. Tap on Download and Install! Provide your passscode, agree with terms and be patient until your iPhone or iPad downloads the around 200 MB upgrade package. Do make sure that your device’s battery percentage is above 50% or that the iPhone is plugged in, for everything to run smooth. 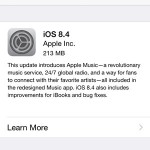 Apple’s servers are running good at the moment, the rush hour caused by the release has flattened out, so the whole process should take less than 20 minutes. Here is the full list of changes brought by this update:
1. Apple Music
– offers you the option to enroll as an Apple Music member and listen to millions of songs from the catalog, or save them for offline playback. There is a 3-month long trial period, followed by a $9.99 monthly fee if you decide to stick to the service.
– Playlists and albums selected by experts are automatically recommended to fit your preferred music style.

– Apple Music members can listen the most recently released songs directly from editors.
– Tune in with Beats 1 radio or play some other station created by Apple’s editors. You can even create your own radio!
– Connect with your favorite artists and see what they are up to, by checking their latest videos, photos, thoughts or mixes.
– Your Music now includes hits from your iTunes purchases, Apple Music songs and playlists all in one place.
– Revamped iOS Music Player that now includes: Recently Added, MiniPlayer, Up Next and more.
– iTunes Store is still available to by your favorite tracks.
Fact: Apple Music availability, pricing and certain features my vary by country!

2. iBooks
– Audiobooks can now be downloaded, browsed and listened from iBooks
– Now Playing feature available for better control of audiobooks playback.
– Books made for the iOS iBooks app now work on iPhone too and not only on iPad.
– You can now find and pre-order books from a series, from your library.
– Books created with iBooks author have improved accessibility of widgets, glossary and navigation when browsed in the iBooks app.
– New default Chinese font.
– Auto-Night theme can be turned off, using a new library setting.
– Hide Purchases feature bug is now solved.
– Solves a flaw that might have prevented books download from iCloud.

3. Other Improvements & Fixes
– Fix for the malicious Unicode message that caused the iPhone to reboot.
– Solves a bug that stopped GPS accessories from providing positioning info.
– Fixes a bug that sometimes caused deleted Apple Watch app to automatically re-install.