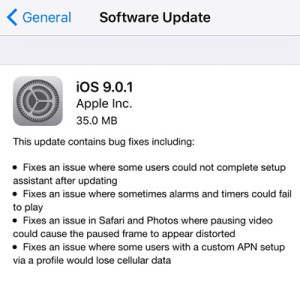 Exactly one week after the major iOS 9 release, sees Apple coming with a correction! It’s a new update package labeled as 9.0.1 which doesn’t bring any new features, but promises to handle a few shortcomings of the most recent iOS generation. The Cupertino-based technology giant claims that today’s release fixes a series of bugs which sometimes caused malfunctioning of the: setup assistant, alarm clock, Safari and Photos apps.

iOS 9.0.1 can be updated from the Settings app, via the Software Update menu. The release is 35 MB big and comes to precede the already beta tested iOS 9.1 version, which will be the first important iPhone O.S. iteration. So far, we know that 9.1 will add a series of new emojis to the built-in iOS keyboard. But, we’ll find out more from the second beta which has also been made available for download a few moments ago.

iOS 9.0.1 Full Update Log
If you check the complete update log of this minor firmware update you’ll notice right away that we’re not talking about a significant release. But as long as it corrects a series of problems. you should go ahead an upgrade. The small size makes it easy to download and install.
– Fixes an issue where some users could not complete setup assistant after updating. (This is referring to the setup assistant, glitches after updating to iOS 9.)

– Fixes an issue where sometimes alarms and timers could fail to play. (That’s related to the built-in Clock app)

– Fixes an issue in Safari and Photos where pausing video could cause the paused frame to appear distorted.

– Fixes an issue where some users with a custom APN setup via a profile would lose cellular data.