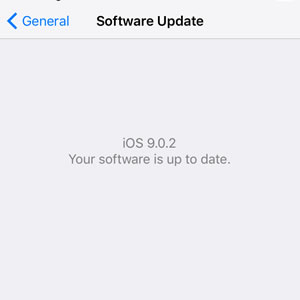 Apple confirms its newly formed and strange pattern of issuing iOS updates once a week. The Cupertino-based tech giant has just released iOS 9.0.2 with additional bug fixes and improvements to its 9th iOS generation. This is the third update in as many weeks. The trilogy started Wednesday, September 16 with the major roll out of iOS 9. Exactly, one week ago iOS 9.0.1 was announced and came to resolve some unpleasant glitches, like non-ringing Alarm Clocks, faulty Timmers and much more.

iOS 9.0.2 is now available over-the-air from your iPhone’s Settings app, or plugged-in via iTunes. The firmware package has a size of around 72 MB. That’s relatively small and should be easy to download wirelessly. Just make sure that your iOS gadget’s battery percentage is over 50% and that you’re near to a Wi-Fi hotspot. If you’re not in a rush you can also wait and schedule a nighttime automatic iOS update. Else, open Settings, browse to General and tap on Software Update. Hit Download and Install and be patient until the iOS 9.0.2 is downloaded, installed and your iPhone reboots. 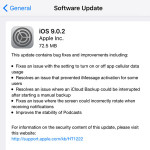 – Fixes and issue with the setting to turn ON or OFF app cellular data usage (after several users complained on discussion forums about increased data usage since upgrading to iOS 9).
– Resolves an issue that prevented iMessage activation for some users.
– Resolves an issue where iCloud Backup could be interrupted after starting a manual backup.
– Fixes an issue where the screen could incorrectly rotate when receiving notifications.
– Improves the stability of Podcasts.

Fact: Considering that over 50% of worldwide iOS users have updated to iOS 9 within the first 7 days from the release, we can surly conclude that this is the OS with the fastest adoption rate, worldwide. This seems to have motivated Apple to promptly address the smallest issues and fix them with these minor updates!