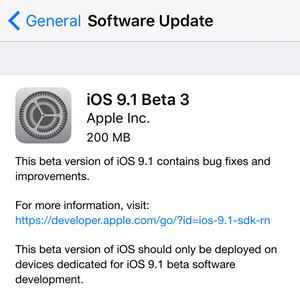 Apple seems to have made a habit of making bulk software updates during the middle of the week. Earlier we reported that iOS 9.0.2 has just been rolled out, to fix various bugs related to abnormal cellular data usage, iMessage registration and a few other glitches. In the meantime we discovered that the Cupertino-based company has also seeded the third iOS 9.1 developer beta version, as well as the first iOS 9.1 public beta release. The two are one and the same, excepting that the developers edition can be downloaded only if you have an Apple coder account, or if you apply this trick.

The fact that iOS 9.1 public beta has also been released tonight, means that the version is close to its general public launch and Apple fans, that volunteered as beta testers ,have one final go at it before a potential, Wednesday, October 7 roll out?! I do feel the need to remember that the iOS 9.1 developer beta 2 was seeded exactly one week ago, together with iOS 9.0.1.

iOS 9.1 Beta 3 Update Content
According to the Software Update presentation, this third beta version contains the already traditional bug fixes and improvements. Considering that the previous beta were a little battery devourers, I expect for this issue to be corrected. During the short period I had to review it, I can only confirm that it sticks with the new emojis already introduced in beta 1, as well as the Show Contact Photos setting for the iPhone 6 and newer devices. 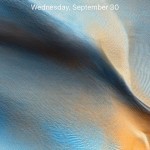 iOS 9.1 Beta 3 New Wallpapers
One notable addition to this 3rd beta test version are a few new wallpapers. I’m talking about the Stills represented by the three planets and the one displayed in the print-screen provided nearby. You can preview and download all four new additions, available below. Tap the images or press firmly on the screen (if you own an iPhone 6S) to unveil the Save Photo option. Once the images are saved in the Photos app, you can preview them and set them as wallpapers if you want. 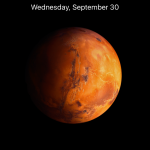 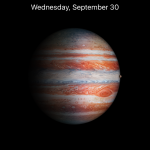 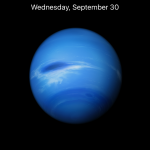 How To Download iOS 9.1 Beta 3 & Public Beta
1. iOS 9.1 Public Beta can be installed as any other public test version. You have to visit the Apple Beta Software program, sign in with your Apple ID, or sign up on the spot, if you’re not already a member. Download the iOS 9.1 beta profile on your iPhone. Next, open the Settings app on your iOS device, go to General -> Software Update. When the iOS 9.1 public beta update is prompted, tap on Download and Install and complete the OTA update as any other firmware upgrade.

2. iOS 9.1 Developer Beta 3
– This test version requires you to own an Apple developer account. Sign in the Apple Developer Center and grab the pre-release.
– You can also grab this 3rd beta from a third party source, as described here. However, with the public beta featuring the same firmware, I would advise you to follow the tips described above and install an official version of this test firmware.