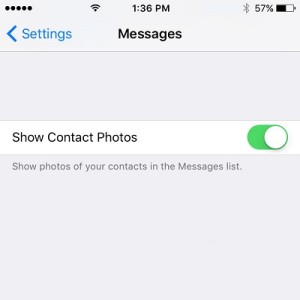 The 2nd beta for the iOS 9.1 firmware has been released a few hours ago, along with the public iOS 9.0.1 update. We’ve installed this 2nd developer beta on our test device and noticed that it comes with stability improvements and performance enhancements. If you follow us, you already know that iOS 9.1 will add a series of new emojis, according to our beta 1 review.

This second test firmware also brings a notable enhancement, called Show Contact Photos. It’s a new option for the Messages app, available for the iPhone 6 devices and never. Now you can control if you wish to display the small thumbnails next to each conversation thread or not. Starting with the iPhone 6 running iOS 8 contact icons are shown by default in the Messages app. However, this changes with the release of iOS 9.1.

Disable Contact Photos in Messages
To turn off the images next to your Message threads, open the Settings app and browse to Messages. Toggle the knob next to the Show Contact Photos label to the OFF position and that’s it! 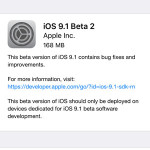 If you wish to try this new iOS test version yourself, you have two options to install it on your device:
1. Over The Air
If you’re an iPhone power user you must have already the iOS 9.1 beta 1 installed on your device. In this case upgrading to the 2nd beta is very easy. Just open the Settings app and browse to Software Update. Tap on Download and Install after your device finds the firmware update and proceed as with any public OTA new release.

2. Developer Account
If you’re not running a developer beta on your iPhone, you have to know that the iOS 9.1 betas are developer oriented. This means that they’re released for test purposes and if you decide to install them on your device you do it at your own risk. The official way to do it is sign-up for an Apple developer account, pay the $99 monthly membership fee and gain access to the betas.

3. iTunes Software
However, there is also a trick that you can apply in order to install iOS 9.1 beta 2, without needing to become a developer. The workaround is explained here. Follow the steps mentioned and install the first beta. Than you can use option 1 from this article and update over the air to the second release. Or, if you find the iOS 9.1 beta 2 firmware download package for iTunes (during Step 3), grab it and you’ll update directly to the 2nd beta.

Last Updated on November 1, 2016 by Patricia