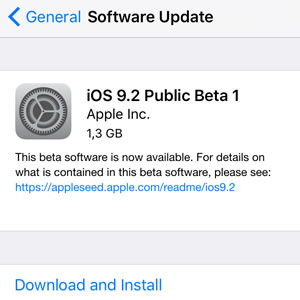 With iOS 9.1 up for grabs, the Cupertino-based programmers have started working on the next iPhone operating system version. The iOS 9.2 Beta 1 is now available for over-the-air download, to all public Apple beta testers. This end version of this new iOS iteration should be rolled out in November along with the new iPad Pro.

iOS 9.2 Public Beta 1 edition becomes available one day after the same firmware was released to those users owning an Apple developer account. The update includes the traditional bug fixes as well as noticeable Safari update. More precise, the embedded Safari views have received the latest features available within the Safari app. I’m talking about options like press & hold the reload page button to unveil the Desktop version of the current website or to load it without using content blockers (if you use such software on your iPhone).

iOS 9.2 Beta 1 Add-Ons
Yes, all these changes were introduced with the 9.1 release, however they were available only within the Safari app. Now, they’ve can be used within the Safari embedded views too. That’s every time when you’re opening a link, from a third party app, with the help of the built-in iOS browser.
More, some share extensions were also not available with the third party Safari embedded views. All share sheet options available while browsing from the Safari app are now available within the View Controller too. One simple example would be the 1Password share extension. 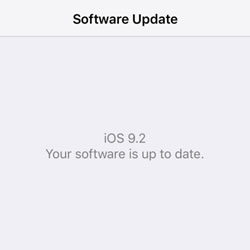 Step 1: Enroll to Apple’s Beta Software Program by taping on this link.
Step 2: Download the iOS 9 Beta Software Profile from the page provided above.
Step 3: Open the Settings app on your iPhone and browse to General -> Software Update.
Step 4: Tap on Download and Install and perform the OTA update as you do with any other regular iOS upgrade.

Fact: Your iPhone will reboot after the process is completed. A new app called Feedback will appear on your home screen. It’s Apple’s Feedback Assistant that you can used it whenever you uncover a bug or want to contribute to the iOS improvement.