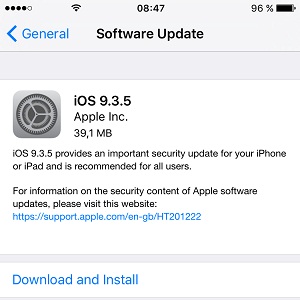 After patching the exploit used by Pangu Team to release their iOS 9.3.3 jailbreak, Apple has just seeded yet another software update for iPhone, iPad and iPod touch that promises to fix one more security flaw. The update log is similar to the one provided in iOS 9.3.4 which states: “iOS 9.3.5 provides an important security update for your iPhone and iPad and is recommended to all users.”

It seems that Apple has patched an important security glitch that allowed attackers to hijack and iOS device and control it remotely. Attackers could control the iPhone’s camera, microphone and even have access to audio calls made on secured cross-platform communication apps, like WhatsApp. The exploits were discovered by an independent laboratory from Toronto called Citizen Lab. Here you can find their article on the subject, which generated this iOS 9.3.5 version.

How To Update To iOS 9.3.5
Updating is easily done over-the-air from your iPhone’s Settings app. Browse to General, Software Update and allow your iOS device to find the latest version. Tap Download and Install when ready and your device will download the new firmware and install it on your device.
If you’re upgrading from iOS 9.3.4 the update package is 39,1 MB large and can be deployed on every device compatible with iOS 9.
Fact: Apple doesn’t sign iOS 9.3.3 version anymore. So, if you run it and are jailbroken, be aware that you won’t be able to return to it in case you upgrade to this latest release.

Info: If you want to read more in depth details about the security update available with iOS 9.3.5 you can do it on the Apple.com website.