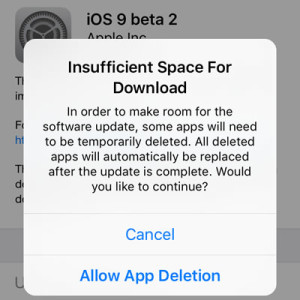 The second beta of the upcoming iOS 9 has been released this week and one new feature worth mentioning is the software’s ability to clear up storage space, on your iPhone, if you wish to perform a Wi-Fi update and there aren’t enough MB free on your device. Until now iOS would interrupt the upgrade process and ask you to manually free up space on your smartphone.

Starting with iOS 9 users will be able to allow their iPhones to automatically create space for the software to deploy and intall its update, by agreeing for some of their apps to be temporarily deleted. The erased applications will be restored once the OS update is complete. App data is also saved. You aren’t able to choose which apps can be deleted, iOS 9 will automatically take this decision for you. After upgrading ends, you’ll see some of your applications grayed out on the home screen. It means that they where sacrificed and are currently being restored! 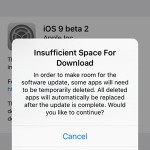 Whenever you install a new OS version on your iPhone or some other Apple device, the new version’s installation package has to be downloaded to your device. The contents are used to install the update. When the process finishes, the firmware file is deleted, because it’s no longer needed.
In iOS 9, if the iPhone or iPad doesn’t have enough storage space to accommodate the installation file, the software can asses how much more space it’s needed and is able to automatically delete some apps until it obtains enough free space to be able to run the update. After the upgrade finishes, iOS will restore the deleted applications, along with all their data. This new feature is handy for OTA (Over The Air) updates. If your gadget is plugged in backing up on Mac or Windows is a formality.

The only action required from your end is to “Allow App Deletion”, in case your device prompts you with the “Insufficient Space For Download” prompt, while the iOS 9 update process is running. If you tap on “Cancel”, the upgrade is aborted and you have to manually clear up space on your device. The downsides of freeing up space on your own, is that it will take you longer and restoring the data will also be a little trickier. However, instead of deleting apps you can erase photos or videos that you no longer need, or that you’ve backed up on your iCloud or computer.