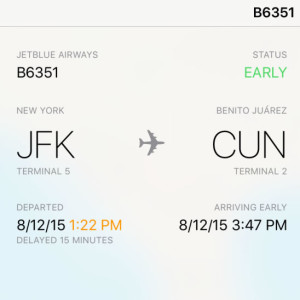 Until now, tracking airplanes on your iPhone was only possible with the help of third party App Store apps like FlightRadar24! Apple plans to change this as a new function available with the upcoming iOS 9 has been recently uncovered, on the Apple discussion forums. It’s called Flight Data Detector and has the role to recognize and isolate flight names in text displayed on your iPhone, iPod and iPod touch. More, it provides the option to easily check each identified flight and receive, in real-time, the most important information including flight path and the actual progress of the airplane.

It’s true that the extent of data is nowhere near as detailed as the info provided by paid App Store apps like FlightRadar24, but the basics are there, presented in a nice looking user-friendly interface. Very important is the fact that you can easily open up the data from any screen that text references the flight in question. This features builds on Apple’s desire to unveil a more intelligent operating system and completes other iOS 9 new features like Proactive search.

For example, if you receive a message or mail that includes your flight data, iOS will identify it and create an actionable hyperlink. When tapped a pop-up with the flight’s important data, like departure and arrival times are displayed. This way you can easily check the routes that you’re traveling on. More important, you’re informed about the actual Status of a flight and know if an airplane is on time or not!

How To Use iOS 9 Flights Data Detector 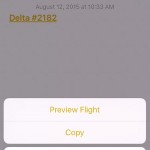 To quickly get an idea about how this new function works, think about how the phone numbers are highlighted, within text on your iOS device. They also get a link and you can instantly dial if you tap on the multiple digit string. No matter if the info is displayed within a Safari web page, a text message or your own memos, the feature works identical.
Step 1: Get your flight displayed in text format somewhere on your iPhone’s screen. If you don’t have it within an email sent by the airline, simply open up the Notes app and manually tap your flight number. It should be something like: United Airlines #3453, or Delta #2182.
Step 2: Tap the hyperlinked flight name and a few options will pop-up: Preview Flight, Copy (the text) and Cancel.
Step 3: Obviously you have to hits the first button and the flight’s real-time info page opens up. Tap Done, in the top-right corner after you finish your look up. 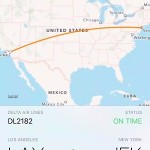 The info provided by this new iOS 9 feature includes:
– A graphic representation of the flight path, which highlights departing city, route and destination.
– Airline name, flight number and real-time Status details.
– Abbreviation of the departing and arrival airports, as well as the used terminals.
– Scheduled departure time as well as additional info about the real take-off time, along with planned arrival data and actual estimation (if the status is checked while the plane is airborne).

Tip: You can use short forms for flight numbers if you know the IATA prefix of the airline company. A few examples are: UA (United Airlines), DL (Delta), AA (American Airlines), WN (Southwest), VX (Virgin America). You can get all of them over here.