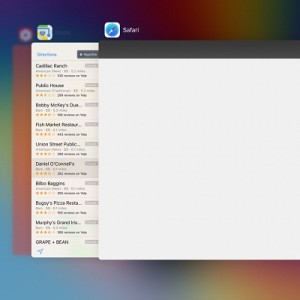 Apple’s native Internet browser will receive a small but important Privacy update, this fall, with the release of the 9th iOS generation. The upcoming change has been noticed by our staff, while testing the iOS 9 Public Beta 3. Whenever you need to visit and important website, but don’t want its details saved in Safari’s web history, you can switch to Private mode browsing. This way Privacy is enhanced by the fact that your browsing activity is not stored anywhere on your iPhone.

However, if you use an iOS device in public, a small glitch could expose your last visited website, even if you surf in Safari Private mode. As you know, when opening the App Switcher screen, to multitask between previously used software, all apps lingering in the background, display a snapshot of the most recent screen you were on before exiting. In iOS 8 and earlier, Safari would expose a screenshot of your last visited webpage even if Private mode was enabled!

Starting with iOS 9 this leakage gets corrected and Safari blanks out the App Switcher snapshot if the built-in Internet browser is currently running in Private mode. This way you’ll avoid unwanted sneak peeks when using your iPad, iPhone or iPod touch and are surrounded by others.

This is a similar Privacy addition to the one, introduced with the release of iOS 7, when Apple allowed iPhone users to hide incoming message previews from displaying on lock screen and other alerts like banners and Notification Center listings. This way you can avoid leaking important conversations to those unwanted eyes that could read your personal messages, when using the iPhone in the presence of others, or having it displayed on a desk or any other public location.