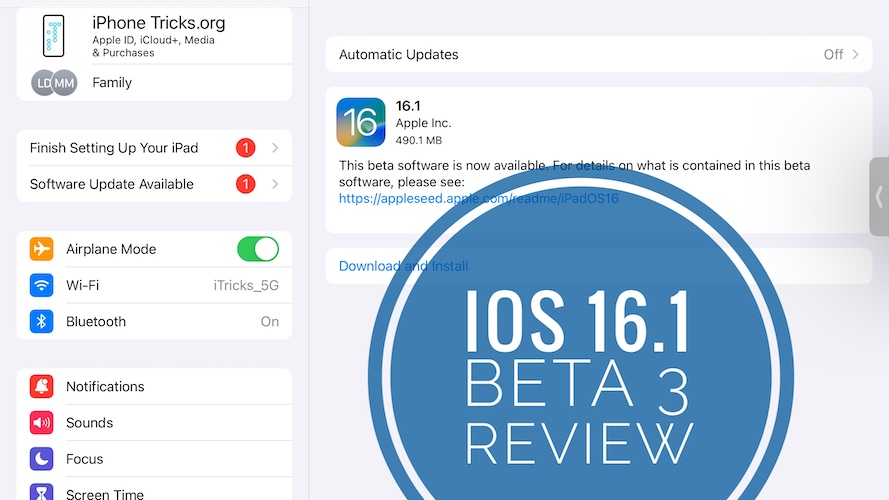 Apple has released iPadOS 16.1 Beta 3 build number 20B5050f for Developers. The Public Beta is expected soon. This version fine tunes iPadOS 16 for its public release, delayed for October. Check the bug fixes, features and of new problems reported by readers!

Important: This release is officially named iPadOS 16 Beta 9, because iPadOS 16 hasn’t been released to the public yet. However, once installed on the iPad is shows as iPadOS 16.1, because it will match iOS 16.1 on launch date.

That’s why we refer to it as iPadOS 16.1 Beta 3. It’s the third beta since Apple announced that iPadOS 16.1 has been postponed for October!

Review the bugs already reported for this version, before deciding to download:

You can install this version, over-the-air in Settings -> General -> Software Update, as long as the iPadOS 16 Beta Profile is installed on your iPad.

If your device is running a watchOS 9 Beta version and you haven’t deleted the Configuration Profile in the meantime, you’re good to go!

Changes when compared to the previous beta are highlighted here:

Problems solved in this release are displayed below:

Tip: For more info regarding known issues and other problems solved in this release please check the iPadOS 16 Beta 9 Developer release notes.

Have you installed iPadOS 16.1 Beta 3 (iPadOS 16 Beta 9)? What’s your feedback? Did you spot any new features not mentioned in this article? What about bug fixes or new problems? Share your feedback in the comments please!