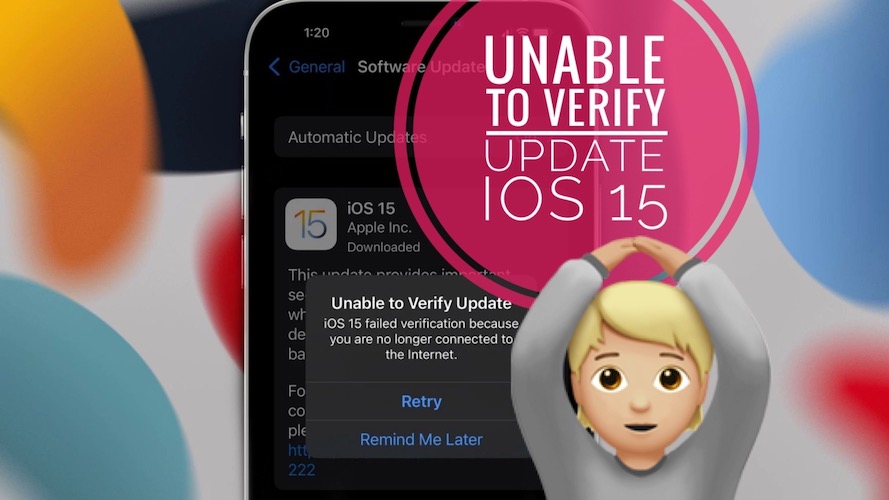 Is your brand new iPhone 13 prompting you with the Unable to Verify Update error when trying to install iOS 15? Are you informed that “iOS 15 failed verification because you are no longer connected to the Internet”, although your web connectivity works without any problems?

Apparently, Apple has pulled the day one iOS 15 update, that was fine tuning the older iOS 15 pre-installed version that the new iPhone shipped with!

This triggers the Unable to Verify Update error, but you shouldn’t worry too much about it. It means that an iOS 15.0.1 software update is imminent, especially with the iOS 15.1 Beta 2 released yesterday.

Can You Fix Unable To Verify Update Causes?

At this moment you don’t need to do anything. If you haven’t managed to update yet, stick with the iPhone 13 pre-installed iOS 15 (19A341) version. Follow us and we will inform you as soon as a new update, most probably iOS 15.0.1 will be released any moment now!

The iPhone 13 lineup comes with a series of launch-day bugs that justify an imminent iOS 15.0.1 hotfix update! Some of the most reported problems are: Tap to Wake not working, various touch screen issues, unlock with Apple Watch not working and more!

Do you encounter other iPhone 13 bugs not mentioned here? Use the comments section to share your feedback!

Related: Check out these dixes and workarounds for common iOS 15 bugs:
– Safari video playback not working, black screen bug.
– Visual Look Up not showing up in Photos.
– Facebook Messenger videos flicker.
– Findable After Power Off not working for iPhone.
– Widgets turning white or black on iPhone Home Screen!