iPhone 6 and iPhone 6 Plus Released by Apple 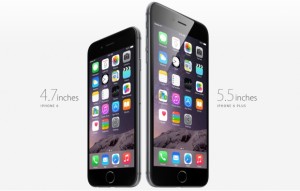 iPhone 6 and iPhone 6 Plus

As expected, Apple have released, only a few hours ago, their new flasgship devices called, iPhone 6 and iPhone 6 Plus. The first one comes with a 4.7-inch display, while the bigger version shows images along 5.5 inches.
Both of them are considerably bigger as the previous iPhone 5S version which offers a 4-inch display. This is best highlighted by Apple’s official slogan ‘iPhone6, Bigger than bigger’.
Although the length and width of the new iDevices is bigger, the depth is actually slimmer, making the iPhone 6 the slimmest smartphone devices ever manufactured by the Cupertino company. The iPhone 6 comes at 6.9 mm thin, while the Plus version is 7.1 mm thick. Both versions considerably thinner than then 7.6 mm iPhone 5S.

iPhone 6 Features and Specs
– along with the above mentioned physical changes the iPhone 6 has rounded sides and edges, making it smoother and more comfortable for hold and use.
– the display is protected by ion-strengthened glass, so that’s not the much anticipated sapphire glass coating.
– the Resolution is 1,334×750 pixels with 326ppi and dual-domain pixels technology. Apple call this display available on the iPhone 6, Retina HD. While the iPhone 6+ comes with a full HD resolution 1,920×1,080 pixels and 401ppi.
– the iSight camera comes with improved specs although it’s still 8-megapixel big. A plus for the iPhone 6+ is the optical image stabilisation feature. Also an new focusing and exposure module improves image quality for both new iPhones. Both cameras come with a new focus sensor which enables better and faster focus.
– in terms of video improvements I have to mention the new Time-Lapse feature as well as enhanced Slow-Motion filming capabilities of 240 fps, double as many as those available with the iPhone 5S.
– as expected both Devices are faster with the help of the new A8 processor. Apple describes it as being smaller, faster and more energy efficient as its predecessor. To be more exact we are talking about 25% faster and 50% more energy efficient.
– an M8 motion processor is also embedded with the iPhone 6. It efficiently measures your fitness activity thought the day. It comes hand in hand with a new Health app that will track ones physical activity and provide useful graphics about distance, elevation (with the help of a new barometer sensor) and much more.
– Apple Pay is another important upgrade to these latest flagship. NFC technology is supported by the iPhone 6 which allows you to perform contactless payments with your iPhone. Payments are made by a single tap on the Touch ID, without event waking the device as shown in the video available below!