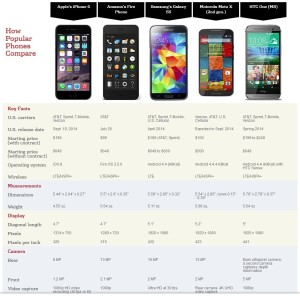 With most specs and features of the new iPhone 6 already available we can compare Apple’s latest flagship with its popular competitors from Samsung, HTC, Amazon or Motorola.

So, in this article you can check a direct comparison between 5 flagship smartphones and I’m talking about the Apple iPhone 6, the Samsung Galaxy S5, the HTC One M8, Motorola Moto X and Amazon’s Fire Phone. I will focus on comparing each of the 4 smartphones with the iPhone 6 as Apple’s iDevice is the hottest unit of the moment.

However, if you wish to compare all 5 phones in the same time, simply click on the nearby image or scroll to watch our YouTube video, that covers this subject.

iPhone 6 vs Samsung Galaxy S5
This is probably the most looked after head to head comparison, between two huge rivals, Apple and Samsung. Let’s start with size and display. The iPhone 6 comes with a 4.7″ display while, the Galaxy S5 has a 5.1″ screen. The Korean manufacturer flagship provides a higher pixel per inch ratio 421 versus the 326 ppi offered by Apple. The iPhone 6 resolution stays also the same as his predecessor 1334 x 750 while the S5 provides 1920 x 1080.
However, the iPhone 6 scores when it comes to design, quality of manufacturing and size. The 8th generation iPhone is 6.9 mm thin (0.27″) while his arch rival is about 20% thicker.
When it comes to the O.S. comparison the iOS 8 seems still more stable and superior to its Android 4.4 ‘Kitkat’ version.
Apple insist that the iPhone 6 Wireless technology is the best on the market with over 20 LTE bands making the device’s connection faster and usable on longer distances.
Samsung, on the other side, tend to score better when it comes to the camera comparison. Rear 16 MP vs 8 MP and front 2.1 MP vs 1.2 MP. However, Apple claim that they can easily compensate the megapixel difference with the help of extra sensors which provide better exposure and focusing features.
In terms of video recording capabilities Apple raises the bar with the 1080p HD recording available in both 30 and 60 frames per second. Samsung praise themselves with their S5 Ultra HD recording properties.
Battery life should be similar for both devices. Apple compensates that larger 2,800 mAh battery accommodated on the Galaxy S5 with a highly efficient Operating System that runs on the A8 chip and the M8 co-processor. For more head to head facts of iPhone 6 v Galaxy S5 please watch the video available below.

Apple iPhone 6 vs Amazon’s Fire Phone
The iPhone 6 wins the head to head comparison with the Amazon Fire Phone when it comes to size, weight, and display features. Apple’s device is lighter, 4.55 (129 grams) oz vs 5.64 oz (160 grams); smaller and comes with better display properties. iOS 8 is superior to the Fire OS 3.5.0.
On the other side the Fire phone is cheaper and comes with a few interesting features like a special sensor that creates a 3D effect to the screen and certain apps.

iPhone 6 vs Flagships Video
Check out our latest video comparing Apple’s new release with the other popular flagships on the market.