Posted in Reviews by Patricia on September 22, 2017 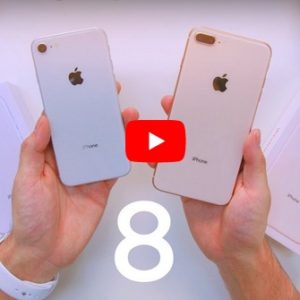 iPhone 8 and 8 Plus unboxing video thumbnail.

The first two 2017 iPhone models to be shipped, the iPhone 8 and iPhone 8 Plus, have reached today, the hands of those that performed during the start of the September 15 pre-orders. Among new owners are also those lucky Apple fans that woke up early and hit the stores and were fortunate enough to find units available on the shelves. Less than 12 hours since the iPhone 8 and iPhone 8 Plus have literally started selling, YouTube has already been invaded by unboxing videos of the new flagships.

iOS power users have even torn down the iPhone 8 and found that the layout of its internals is almost identical with the one of its predecessor, the iPhone 7. However, one of the main selling points remains the incredible A11 Bionic chip that simply demolishes all competitors, as confirmed by Geekbench on their official website. More, DxOMark has rated the iPhone camera as the best one ever built on a smartphone, outperforming the Google Pixel and HTC U11 smartphones.

Unboxing Of all 3 iPhone 8 & 8 Plus Colors (by AppleInsider)

Gold iPhone 8 Plus Unboxing (by EverythingApplePro)