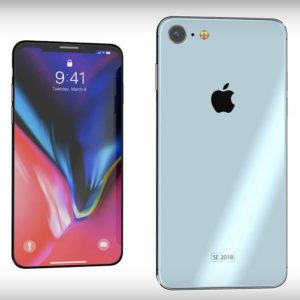 A few weeks ago we’ve informed you about rumors already surfacing about the 2018 Apple iPhone lineup which should include a 2nd generation iPhone X, the oversized iPhone X Plus and an in-between sized, 6.1-inch LCD display iPhone. All of the three devices will embrace the iPhone ‘Ten’ form factor with a Home button-less edge-to-edge display and the controversial top notch.

Nevertheless, a Chinese website has just published an article claiming that Apple also plans to launch a second generation iPhone SE model, that will be manufactured and assembled by Wistron, a Taiwanese manufacturer, in Bangalore, India. As its predecessor this smaller sized iPhone should be target to smaller and mid-range markets. The actual iPhone SE currently retails for $349. It was initially sold for $399.

Specs: The so called, iPhone SE 2 should host Apple’s A10 fusion chip, available on the iPhone 7 lineup, 2 GB of RAM and 32 GB or 128 GB storage options, 12 MP rear camera , 5 MP front facing lens and a 1,700 mAh battery. However, these specs are not confirmed. Neither is the size of the device.

Form Factor: The initial iPhone SE is build on the iPhone 5S chassis, providing the smaller 4-inch screen size preferred by a series of customers that opt for untroubled one-handed iPhone experience. It’s not clear if Apple will stick to the same size for the 2nd iPhone Special Edition generation. Many Apple fans expect the Cupertino-based company to release an iPhone 5S sized iPhone with the same form factor as the iPhone X and the all glass display. But this might be to earlier to achieve for the first Quarter of 2018, when the iPhone SE 2 is expected to be launched.

Launch Date: iPhone SE was announced on March 21, 2016 and went on sale a few days later. The same might happen with the second generation. Follow us and find out more details as soon as the become available.