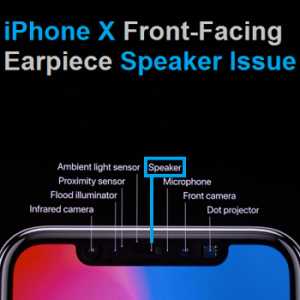 A week into the launch of the iPhone X the device has received an overwhelming positive feedback from both the iOS community as well as Android users and other tech enthusiasts. However, as a first generation product rare software and hardware issues are hard to avoid even by a company with high quality standard, as Apple does. After acknowledging the problem with the unresponsive iPhone ‘Ten’ screen when suddenly exposed to cold temperatures, and very rare reports about green lines appearing on the display, now we’ve been informed about a strange crackling sound that can be heard in the iPhone X front-facing earpiece speaker when the sound volume is maxed out.

Reports about this problem are very seldom though, under 100 cases from a production of million units. Nevertheless, it sounds similar with an earlier problem experienced by the newly released iPhone 8 and iPhone 8 Plus models. Early adopters had reported a similar static noise, in the same front-facing speaker. However, in these cases the crackling occurred only during phone calls, while the iPhone X issue surfaces for any type of audio playback, no matter if its the voice of your conversation partner during a call, listening to music, playing ringtones and more.

In the cases of the iPhone 8 and iPhone 8 Plus crackling earpiece, Apple acknowledged the issue and provided a software fix in the release of iOS 11.0.2. It’s unclear yet if the small number of iPhone X units affected are experiencing a hardware problem with the front-facing earpiece, or the issue is software related too. Apple is yet to release a statement regarding this subject. Stay tuned! We’ll update this article as soon as a fix is provided!

Conclusion: If the iPhone X cracking earpiece sound is hardware related, there’s no way you can fix it. Bring your device to an Apple Store and ask for help. You can book a Genius bar appointment via Apple Support app for iOS. You’ll most probably receive a replacement unit, free of charge, without needing an AppleCare+ plan.
Else, you have to wait for an upcoming Apple software update that will include a fix for the static noise!

Related: Test your iPhone X front-facing speaker with the help of the new Reflection ringtone!