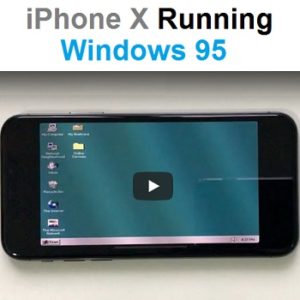 The iPhone X is Apple’s latest flagship and Windows 95 is Microsoft’s revolutionary operating system for computers which was released on August 24, 1995. What happens if you combine the two? You get a spectacular blend between 2017 hardware and a software that was coded for a PC’s manufactured 22 years ago. The result can been seen in the YouTube video embedded below.

Of course, that there’s no solid reason for trying to replicate this trick yourself, because there’s no usefulness to it, unless you’re willing to play the classic Windows Minesweeper game on your iPhone X. The demo also includes a preview of the old Word processor tool featured by the Windows 95 Microsoft Office, as well as a tour of the SimCity 2000 the classic ciy-building simulation video game!

Fact: Windows 95 can be installed on the iPhone X as well as other iPhone version with the help of an emulator and the Power DOS application, which is available in the App Store and downloadable for $0.99!

Tip: Although fascinating in the days, SimCity 2000 might not be the best game available for the iPhone X. Try instead 2017 hits like Monument Valley 2 or The Talos Principle.