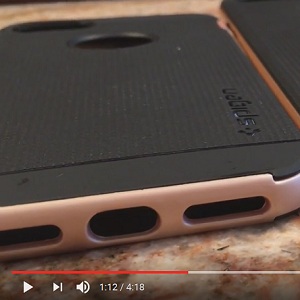 A new iPhone 7 related leaked video, uploaded by JailbreakingiOS user, shows a Spigen branded iPhone 7 case, as well as a larger model which claims to fit the upcoming iPhone 7 Plus and iPhone 7 Pro. How can this be, you might wonder? The next iPhone generation is scheduled to be released this fall! That’s true, but this isn’t the first time when a case manufacturer aims to draw attention and gain free media exposure by risking and releasing a product based on rumors.

Apple doesn’t send new iPhone models in advance to accessory manufacturers. Spigen must have designed their iPhone 7 case based on rumors, in order to have their cases on the shop shelves the same second the iPhone 7 is released. There is a certain amount of risk involved with this strategy, because if they get it wrong the marketing benefits might vanish. According to the recording the cases were bought online from China. So, they might also be fakes indeed.

Spigen iPhone 7 Case Facts
This leak comes to confirm the iPhone 7 clone leak that unveiled the missing headphone jack.
The video clearly shows that there is no hole in the bottom part of the phone to accommodate the traditional headphone jack. Instead, there are two symmetrical orifices though, that might represent the stereo speakers, as well as a centered lightning port vent.
The rest of the case looks almost identical, excepting the Camera hole on the back of the case which is clearly larger on the iPhone 7 cases, confirming that the device will be equipped with a dual lens camera. This however is contradictory with the leaked photos revealed earlier this month, that show a single lens camera for the iPhone 7 and a dual lens one for the 7 Plus and 7 Pro versions.
Another intriguing point is that the iPhone 7 Plus and Pro case doesn’t feature stereo speakers, which feels wrong. It’s simply not in Apple’s nature to provide better hardware on the smaller device from the series. 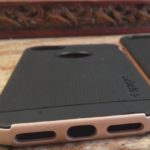 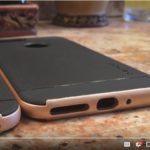 iPhone 7 Plus & Pro no headphone jack no stereo speakers. 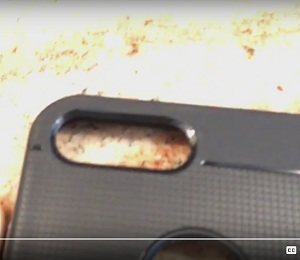 Spigen iPhone 7 Case Video
Conclusion: Take a look at the video yourself and stay tuned for more iPhone 7 news as soon as there are new things to report.