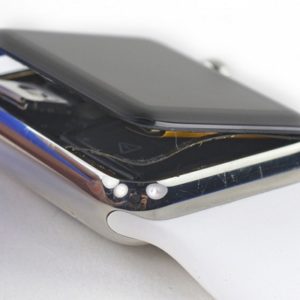 The Apple Watch has just turned 2 years of age. The watchOS device was first released on April 24, 2015 and has managed to dominate the smartwatch industry ever since. Confirming Apple’s high standards, the 1st generation Apple Watch has aged nicely, and proves to be a reliable gadget. There aren’t significant negative reports or complaints on the market, allowing us to say that the original AW was a success.

However, a small durability problem has been reported though and although it’s not widespread to reach media headlines, the Cupertino-based tech giant has acknowledged it and provides a handy solution. Original Apple Watch owners, that experience battery malfunctioning, along with physical deformation will have their devices repaired, cost free. Yes, in some cases, reports state that the AW battery has physically expanded or swollen within the Apple Watch case.

AW Battery Warranty For Special Situations
To patch this problem Apple has decided to extend the service coverage from 1 year to 3 years. The period is counted from the day of purchase. This means that if you own the original Apple Watch and its battery experienced swollen or expansion problems, your wrist gadget will be replaced, free of charge, at an offline Apple retail store, or any other Authorized Service Provider.

Fact: Only the particular case of swollen/expanded battery receives warranty extension! Other battery issues, that don’t come with a physical deformation, remain still under the 1-Year Limited Warranty term.

Important: In fact, any Apple product receives an additional warranty coverage year, in case of swollen/expanded battery. Which means that you have a total of 2 years available, one from the 1-Year Limited Warranty and the other one provided by this special case scenario for iPhone, iPad, iPod, Macbook and other products. It’s the Apple Watch 1st gen that gets yet another additional year of coverage for service repair. Most probably because it’s a new product and cases of battery deformation are a little more frequent.