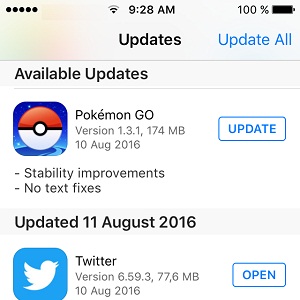 Niantic seeds another Pokemon GO update, just 2 days after the release of version 1.3.0, which was quite important and brought 9 changes to the game. This latest roll out is labeled 1.3.1 and brings only the general “Stability Improvements” to the most popular mobile game of the moment. A first timer is that the Pokemon GO developers seem to have finally caught up with typos, because this latest update is the first one, since the app was launched, that doesn’t include Text Fixes.

In fact, Niantic even highlights this in the version’s, 2-line, update log: “Stability Improvements” and “No text fixes”. Worldwide Pokemon Trainers have to wait a little while longer for the Nearby radar to be debugged and reintroduced, along with a few other upgrades requested by the community. They include, among others, the ability to trade/transfer Pokemon between Trainers, the option to switch Teams and not just Nicknames, plus many more. 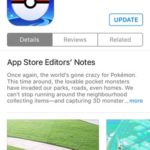 How To Download Pokemon GO 1.3.1
Pokemon GO 1.3.1 is 174 MB large and can be installed via the App Store Updates page. Tap on the app’s icon available on your Home Screen and select Updates, bottom-right corner of the menu bar. Hit the Update label, available next to Pokemon GO and wait until the app is upgraded. When finished, tap Open to resume playing.
In case that you’re not a Trainer yet, download and install the game from the App Store and you’ll get the latest version.

Pokemon GO Tips and Tricks
Improve your Trainer skills by using some of the advice provided in our previous articles:
– Max out your iPhone’s battery autonomy while catching fantasy creatures!
– Prevent Pokemon from breaking and running away while you attempt to catch them.
– How to deal with the Pokemon GO Bag is Full message.
– How and when to use the Lucky Egg spell.
– How and when to plant Lure Module in PokeStop.
– How to hatch Pokemon eggs faster.
– Find out when it’s the best time to Evolve Pokemon to raise their CP and strengthen your squad for GYM battles.