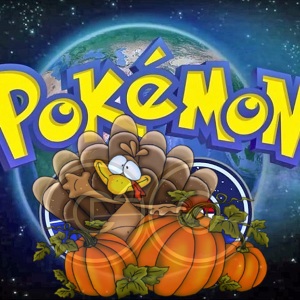 Following the successful Halloween event which unfolded almost one month ago, Pokemon GO hosts yet another in-game celebration labeled ‘Thank You’. It starts today and ends on November 30th. This new event comes to celebrate Thanksgiving 2016 and is also intended to thank worldwide Trainers for embarking in this addictive augmented reality adventure.

Catching Pikachu and his friends has become a phenomenon earlier this summer, when Niantic released the app to the App Store and Play Store. After reaching global heights, the interest in the game started fading away especially because the game becomes increasingly difficult to progress when you reach the deeper stages. Trainers have to earn exponential amounts of XP to increase their level, and collect a lot of resources to be able to upgrade their creatures. Other limitations that prevent players from trading Pokemon and fighting real-time battles along with updates failing to adjust them have also contributed to this downswing.

However, Niantic managed to revive the game by launching the Halloween event, which was hosted between the October 26 and November 1 time frame. The double amount of candies collected by Trainers for catching a Pokemon, as well as adjusted spawning algorithms that promoted ‘spooky’ Pokemon hunting brought the masses back. 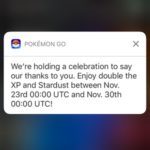 Pokemon GO Thank You Event Bonuses
The Thanksgiving Celebration comes also with a series of bonuses. Now, it’s time to improve your XP, because all experience points that you normally collect for actions like catching Pokemon, checking PokeStops, hatching Eggs, evolving Pokemon, etc. are doubled (x2)!
Tip: In July I’ve provided you 10 tips to rapidly increase your XP that could bring you 20,000 XP within 30 minutes. Apply them this week and you’ll get 40k XP within half an hour.

What Does Stardust Do In Pokemon GO?
By the way, Experience Points isn’t the only bonus, Stardust is also doubled, during the ‘Thank You’ event. This resource allows you to Power Up your monsters and improve their combat abilities. Stardust is earned when catching Pokemon or hatching eggs and can be used for all Pokemon breeds. However, you also need the required amount of species specific candies to be able to Power Up your monsters!