Posted in Apps or Games, News by Patricia on November 9, 2016 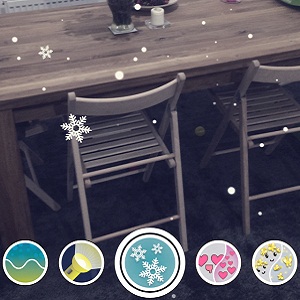 The hugely popular mobile messaging application has just reached version 9.43.0.0, in the App Store. This is the update that will be remembered as being the one that brings Augmented Reality to Snapchat. AR had a major contribution to the success of Pokemon GO and it will certainly make Snap Inc’s app more interesting to the average user. Augmented reality blends the real and virtual worlds by creating a combined image that includes computer-generated images overlaid on an user’s real view of the world. This view can be provided by the lens of a smartphone camera, for example.

Snapchat calls the feature that allows you to capture augmented reality photos and videos, World Lenses. This option can only be enabled when the user aims to capture media with the rear-facing camera of an iPhone, iPad or any other smart-device. At the moment there are 7 types of lenses that you can choose from, one of them specially designed for the 2016 U.S. Elections.

How To Use Snapchat World Lenses 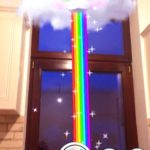 If you’re new to Snapchat, you might have a hard time discovering how to ad augmented reality to your photos & videos. To snap AR photos follow these easy steps:
1. Make sure that your iPhone runs Snapchat 9.43.0.0 or newer.
2. Open Snapchat and aim your camera towards and object or scene that you want to capture.
3. Tap to focus on your target. A series of lenses will slide in from the right-side of the screen. Tap the first World Lens to select it or slide-left on the lenses to unveil a bunch of them.
4. When you decide upon the one you want to use, tap the Shutter button and a photo will be snapped.
Fact: Press & hold the Shutter to record an Augmented Reality video.

Snapchat World Lenses Presentation
As mentioned in the introduction, there are currently 7 different AR filters available: 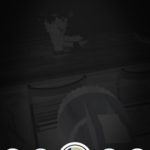 1. Happy Clouds: requires you to “Look Around“, i.e. to move your iPhone camera in order to detect the clouds hovering above you. Some are smiling to you, others are vomiting rainbows. Isn’t that cute?
2. Floating Stars & Bubbles: Wanna capture a disco mode
3. Night mode With Flashlight: the viewfinder gets dark, really dark. A torch recreates the perfect sensation of a spooky scene.
4. Poetic Snowfall: capture your surroundings during a marvelous snowfall that lasts as long as you wish.
5. Hearts Fiesta: move around to splatter pink hearts all over the place. Love is in the air! 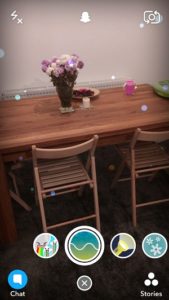 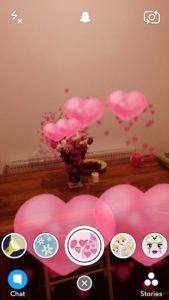 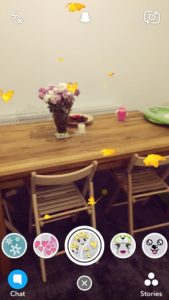 6. Flying Butterflies: this AR overlay brings a bunch of butterflies hovering on your Camera viewfinder.
7. Go Vote: a temporary augmented reality filter that reminds and encourages U.S. Snapchatters to cast their vote during the 2016 Presidential Elections.