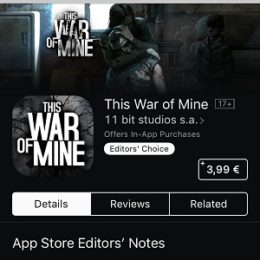 One of the most exciting games that I’ve played so far, on my iPhone, is called This War Of Mine. It’s highly interesting because it presents war from a different perspective. You’re not an elite soldier anymore that is encouraged to kill and conquer for glory, but instead, get the chance to experience the war…

Read More
Tags:11 bit studiosApp StoreDiscountDownloadGameGameplayiPadiPhoneSalesWar
Copyright © 2014 - 2022 iPhoneTricks.org
This website is not owned, licensed or affiliated with Apple Inc.
The content of this website is not supplied or reviewed by Apple Inc.
iPhone is a trademark of Apple Inc. For more info please read our Disclaimer.