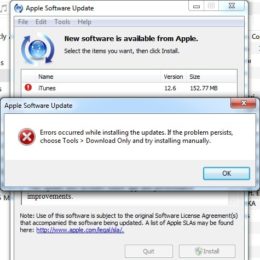 How To Solve The iTunes 12.6 Update Install Error On Windows And Mac

Along with the important iOS 10.3 release, Apple has also seeded an update for iTunes. Version 12.6.0 represents a major overhaul to the popular software that runs on Mac and Windows computers and allows iPhone, iPad and iPod users to efficiently organize their music, browse the iTunes Store and even more important, backup their iOS…

Read More
Tags:64-bitAppleErrorFixesiTunesMacRequirementsSoftwareUpdateWindows
Copyright © 2014 - 2022 iPhoneTricks.org
This website is not owned, licensed or affiliated with Apple Inc.
The content of this website is not supplied or reviewed by Apple Inc.
iPhone is a trademark of Apple Inc. For more info please read our Disclaimer.