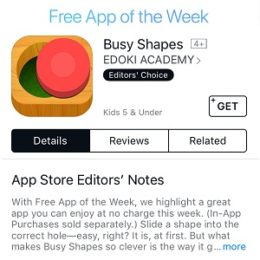 Busy Shapes Is The Free App Of Week 2

It’s been a while since Apple has chosen to select an application designed for children and promote it as the App Store App of the Week. Busy Shapes, developed by the Edoki Academy, targets children between the ages 2 and 5, by prompting them with a digital playground available on the iPhone, iPad and iPod…

Read More
Tags:App of the WeekApp StoreBusy ShapesDiscountFreeiPadiPhoneSale
Copyright © 2014 - 2022 iPhoneTricks.org
This website is not owned, licensed or affiliated with Apple Inc.
The content of this website is not supplied or reviewed by Apple Inc.
iPhone is a trademark of Apple Inc. For more info please read our Disclaimer.