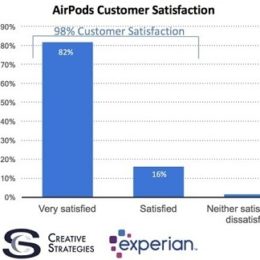 Are AirPods Worth It? 98% Of Customers Said: Yes!

The wireless Earbuds released in the fall of 2016 have been one of the most controversial Apple product launches in the past few years, simply because paying $159 for a pair of Bluetooth earphones was considered by many an extravagance. However, diehard Apple fans couldn’t withstand the temptation of getting their hands on the AirPods…

Read More
Tags:AirPodsAppleBluetoothCustomeriPhonePricingSatisfactionWireless
Copyright © 2014 - 2022 iPhoneTricks.org
This website is not owned, licensed or affiliated with Apple Inc.
The content of this website is not supplied or reviewed by Apple Inc.
iPhone is a trademark of Apple Inc. For more info please read our Disclaimer.