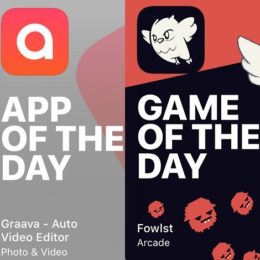 After the September 12 iPhone X keynote Apple’s curators have begun updating the new App Store on a regular basis, thus featuring each day an app and a game under the App of the Day and Game of the Day sections. Differently from the App of the Week campaign which promotes an iOS app or…

Read More
Tags:App of the DayApp StoreDownloadFowlstGame of the DayGraavaInstall
Copyright © 2014 - 2022 iPhoneTricks.org
This website is not owned, licensed or affiliated with Apple Inc.
The content of this website is not supplied or reviewed by Apple Inc.
iPhone is a trademark of Apple Inc. For more info please read our Disclaimer.