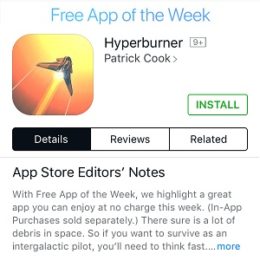 Apple has just announced that Hyperburner is the app on sale during week 16 of 2017. The App of the Week campaign proposes, each week, a paid App Store application, that goes free of charge for the upcoming 7 days. It seems that the Cupertino-based tech giant is up to date with the most recent…

Read More
Tags:App of the WeekApp StoreDiscountFreeGameplayHyperburnerSale
Copyright © 2014 - 2022 iPhoneTricks.org
This website is not owned, licensed or affiliated with Apple Inc.
The content of this website is not supplied or reviewed by Apple Inc.
iPhone is a trademark of Apple Inc. For more info please read our Disclaimer.