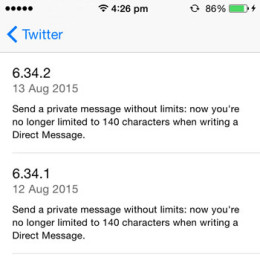 The popular social networking service has just performed an important update to its direct messaging feature. Twitter‘s trademark status updates and messages between users, also known as tweets were limited to 140 characters, since the founding of the platform, back in 2006. However, in an attempt to keep up with the facilities provided by competitors,…

Read More
Tags:iOSLengthLimitMessagesTwitterUpdate
Copyright © 2014 - 2023 iPhoneTricks.org
This website is not owned, licensed or affiliated with Apple Inc.
The content of this website is not supplied or reviewed by Apple Inc.
iPhone is a trademark of Apple Inc. For more info please read our Disclaimer.