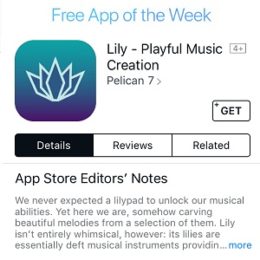 The App Store’s free App of the Week 18 has just been announced. Apple has opted for a Music application this time around: Lily, developed by Pelican 7 has just gone free and will remain so until May 4, 2017. This playful music creation software usually retails for $1.99, but now you can grab it…

Read More
Tags:App of the WeekApp StoreDownloadFreeiOSiPadiPhoneLilyMusic
Copyright © 2014 - 2022 iPhoneTricks.org
This website is not owned, licensed or affiliated with Apple Inc.
The content of this website is not supplied or reviewed by Apple Inc.
iPhone is a trademark of Apple Inc. For more info please read our Disclaimer.