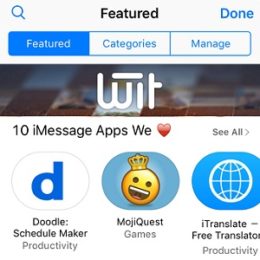 How To Install And Use iMessage Apps From The App Store

Starting with iOS 10, Apple has taken messaging to a whole new level. Besides the special effects that you can include in a text, such as Invisible texts, the built-in Messages app can now host App Store apps that are specifically designed for the iMessage conversation system. Similar to the Apple Watch apps, regular applications…

Google has just released version 42.0.2311.47 of its Chrome browser app, for iOS. A slick trick that now allows you to pull down to upload the current tab has been introduced. In fact, we’re talking about a three-way shortcut that provides swipe-fast access to the Refresh, New Tab and Close Tab commands. Google Chrome is…

Read More
Tags:CloseGoogleGoogle ChromeOpenPullReloadTabUpdate
Copyright © 2014 - 2022 iPhoneTricks.org
This website is not owned, licensed or affiliated with Apple Inc.
The content of this website is not supplied or reviewed by Apple Inc.
iPhone is a trademark of Apple Inc. For more info please read our Disclaimer.