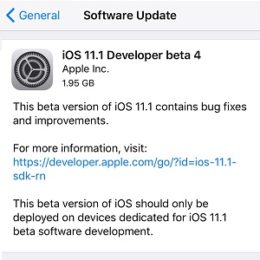 Apple has surprised us today with a series of Beta software updates. The 4th test version of the upcoming iOS 11.1 has been rolled out by the Cupertino-based tech giant, only 4 days after Beta 3 was released, at the start of this week. This surly isn’t an incremental update as its an aproximate 2GB… 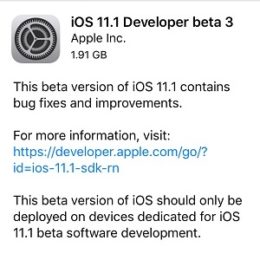 Apple has just seeded the third test version for the upcoming iOS 11.1 software release. iOS 11.1 Beta 3 has built number 15B5086a and is available for download on a total of 39 compatible iPhone, iPad and iPod touch models. This roll out is currently only available for registered Apple Developers, but will be seeded… 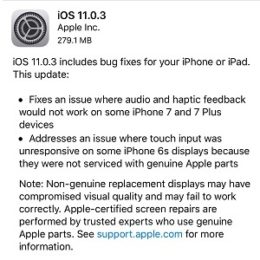 A week hasn’t passed since the official release of iOS 11, on September 19, in which Apple hasn’t issued an update for its revolutionary 11th iOS generation. It’s true that all updates have been minor fixes and performance improvements labeled as 11.0.x. The pattern continue this week too as the Cupertino-based tech giant has just… 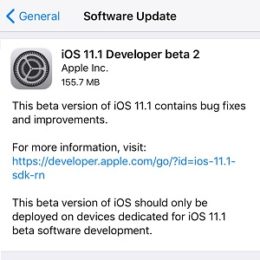 Apple has just seeded the 2nd test version of iOS 11.1 to Developers, almost two weeks after Beta 1 premiered. Differently from the first version, that focused only on bug fixes and improvements, Beta 2 adds numerous new Unicode 10 emojis, as Apple announced on Friday. More, the iOS 11.1 Beta 2 also brings back… 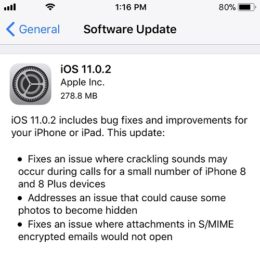 Apple has just released its second software update to the 11th iOS generation. One week after rolling out iOS 11.0.1 and two weeks from the debut of the iOS 11, the Cupertino-based tech giant has seeded iOS 11.0.2 for all compatible iPhone, iPad and iPod touch models. Similarly to the first update, this new firmware…

Read More
Tags:DownloadInstalliOS 11iPadiPhoneiPodIPSWNotesOTAReleaseSoftware Update
Previous Posts
Next Posts
Copyright © 2014 - 2022 iPhoneTricks.org
This website is not owned, licensed or affiliated with Apple Inc.
The content of this website is not supplied or reviewed by Apple Inc.
iPhone is a trademark of Apple Inc. For more info please read our Disclaimer.