Apple has finally provided a solution for those unpleasant moments when the Apple Watch might disturb nearby audience in theaters and cinemas. Various notifications and alarms along accidental wrist raises will usually light up the smartwatch’s display and annoy people nearby and even yourself, while watching an interesting movie or following a nice play. However,… 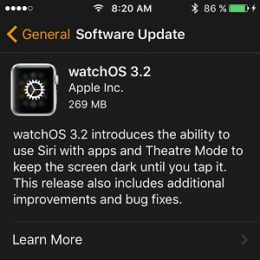 The 3rd Apple Watch OS generation has recently received its 2nd major update since the initial release, in the fall of 2016. watchOS 3 brought a major overhaul to the most popular smartwatch available on the market. Along the fact that apps launch more faster and the general experience is more fluent, new features like…

Read More
Tags:Apple WatchFeaturesImprovementsSiriSoftwareTheater ModeUpdatewatchOS 3
Copyright © 2014 - 2022 iPhoneTricks.org
This website is not owned, licensed or affiliated with Apple Inc.
The content of this website is not supplied or reviewed by Apple Inc.
iPhone is a trademark of Apple Inc. For more info please read our Disclaimer.