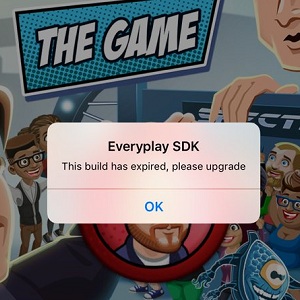 If you open your favorite iOS game on your iPhone, iPad or iPod Touch and get the Everyplay SDK error, don’t panic! You’re not doing anything wrong. This licensing issue has been reported by a series of gamers, in the past few days, and can easily be bypassed by tapping the OK button. This seems like a generalized iOS error that is spread out across multiple App Store games. We have reports from users that play: Con Man: The Game, Hitman: Sniper, Rayman Adventures, First Strike, Badlands: Darkness Falls, Terraria and many other games.

The error message is the same in every case and occurs whenever the app is opened. Take a look a the print-screen uploaded nearby and compare if you’re getting the same prompt. The title states Everyplay SDK and the message reads: The build has expired, please upgrade.

What Is Everyplay SDK?
SDK is the abbreviation for Software Development Kit used by iOS developers (in this case) to create apps and games for iPhone, iPad and other compatible smart device. It’s also know as devkit. The Everyplay SDK is a framework that has the role to record video and audio of the game you’re playing. This allows players to share their gaming experience leading contributing to the app’s popularity. Everyplay is free of charge for both developers and the end user.

Everyplay SDK Error Cause
According to the the framework designers there are two reasons for this pop-up to come up, which states that there is a licensing issue with the framework. It’s either caused by pirated game version or development builds. Taking a look at when theses errors have started to occur, I’m sure that we can make a connection with the release of iOS 10.

How To Solve Everyplay SDK Error 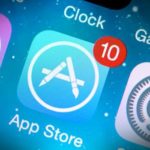 So, if you play a game that you downloaded and installed outside of App Store and falls under the pirated category, make sure that you switch for the legit version.
However, due to the large number of users reporting this issue for various games a software update will surly do the trick. Errors have started popping up after the release of iOS 10. Do expect and App Store update available for the game that is flagging this error, anytime soon now!

Conclusion: Other game functionality isn’t affected by this glitch. Tap OK and go ahead and enjoy your shooter, platformer or whatever type of game you’re currently devouring.