One of the cool features of the recently released iPhone 6S and 6S Plus flagships are animated photos. Whenever you snap a picture, and the Live Photos setting is ON, the iOS device captures a few moments before and after the actual frame, allowing owners to animate the picture. According to Apple officials, images taken in this new format are only a “little” larger, in terms of size.

Pictures are brought to life with the help of 3D Touch, the improved Apple Watch-like Force Touch technology. Simply, browse the Photos app and press firmly on the desired image. It will instantly become vivid allowing you to remember even more details from the scene the picture in question was snapped. 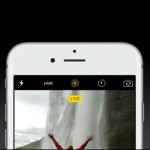 This feature can be easily toggled ON or OFF, from the Camera home screen. Open the app on your iOS device and you can find the Live Photos button, centered, on the screen’s top menu. I’m talking about the circles placed between the HDR and Timer options. Tap it to enable or disable this Setting. Whenever, a photo is recorded a Live status appears below the icon to signal that the image is still shot!

Fact: Whether Live Photos is active or not doesn’t influence images already captured with this setting. Meaning that you can review animated pictures, even if Live Photos is currently disabled on your iPhone.

Tip: Use a Live Photo as iPhone Wallpaper and you’ll be able to animate in whenever you press lively on the display!