Posted in Apps or Games by Patricia on September 19, 2017 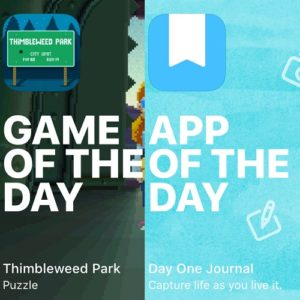 Thimbleweed Park and Day One Journal Game and App of the Day.

App Store’s curators have announced the apps that are featured today along the new Game of the Day and App of the Day campaigns. Thimbleweed Park is a new adventure game launched this month by the developers of Monkey Island and Maniac Maniac Manson. It’s a mystery puzzle game that requires you to uncover the secrets of Thimbleweed Park, a forgotten city that hosts a haunted hotel, an abandoned circus and other creepy stuff. You can pick from one of the five available characters and find out more about Junior Agent Reyes, Agent Ray and the others.

Day One Journal is an award winning diary for your iPhone, iPad and iPod touch. It also comes with an Apple Watch app and was awarded the App of the Year distinction in 2012 as well as the Apple Design Award in 2014. If you like to capture every detail or just the important events this app offers a great interface and the means to do so. This App Store Lifestyle app has an average score of 5-stars from over 1000 users that rated it. 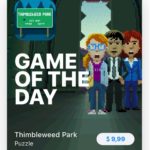 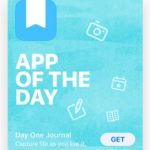 Tip: For App Store promos for your iPhone and iPad check our App Store Deals section!