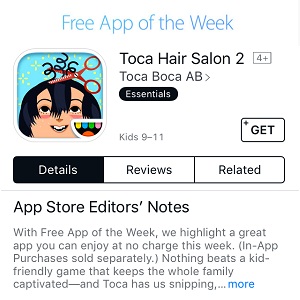 This week’s featured app in the App Store “Free App of the Week” campaign is Toca Hair Salon 2 an educational application for your iPhone and iPad. The software is usually prices at $2.99 but if you hurry up and download it until Sunday midnight you’ll grab it for free. This app, developed by Toca Boca AB, is a pay once and play forever kind of application, which means that you don’t need to perform any payouts under the form of in-app purchases in order to enjoy the software at its full potential.

Toca Hair Salon 2 brings out the hairstylist in you. It’s true that the application is aimed at children, but even adults can spend time on this app and feel entertained. Run your own virtual hair salon and cut, color and style the six characters playing the role of guinea pigs. Use all tools available in a professional hair salon, starting with the basic comb and scissors and continuing with straightener or curling iron.

Download Toca Hair Salon 2 Free
Simply tap this official App Store download link to grab the app free of charge. Hit GET, as you proceed with any other free App Store software purchase and wait until the application is downloaded and installed on your iPhone and iPad.
Fact: Toca Hair Salon 2 runs on any Apple device that is powered by iOS 6.0 or later. It’s almost 100 MB large and includes no third party advertising that could distract your kid from having fun.

Toca Hair Salon 2 Features
Some other functions worth mentioning are:
– Before starting a haircut wash the customer’s hair with shampoo, shower, and towel.
– You’ll enjoy that your clients are able to make fun faces and play sounds while you’re styling them.
– Scissors electric hair trimmer allows you to cut and trim hair.
– You can apply the magic potion G.R.O.W to grow hair back again if you’ve made a mistake.
– Use the realistic color sprays which you can also blend to obtain new shades.
– Don’t forget the hairdryer to get the right look and use the available accessories for the finishing touches.
– try out new accessories like: hats, glasses as well as other popular hair salon tools like razor, crimper, curling iron.