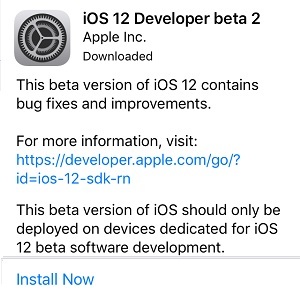 Apple has rolled out the 2nd Beta of iOS 12, two weeks after introducing the 12th iOS generation during WWDC 2018. This second test version is still only Developer oriented, which means that officially only registered Apple developers can install it on their test devices. Nevertheless, as we exemplified with the iOS 12 Dev Beta 1, there is a workaround that allows any iPhone and iPad user to download and install these test versions, as long as their devices are iOS 12 compatible!

The trick requires you to download the iOS 12 configuration from a third party source and not from the official Apple Developer portal. This move comes with its won share of risks but we’ve already tested the download hub for you and did not encounter any problems. Nevertheless, make sure that you perform a full iPhone / iPad backup before proceeding with the iOS 12 Beta installation.

How To Install iOS 12 Developer Beta 2
If you’re already running iOS 12 Beta 1 on your device, the upgrade is very easy. Just open the Settings app, tap on General and open the Software Update screen. Hit Download and Install and perform the over-the-air software update as usual! Those of you that are running iOS 11.4 or any other earlier version this is what you have to do:
1. Download The iOS 12 Configuration Profile as described here.
2. Reboot your iPhone / iPad.
3. Open the Settings app and browse for General -> Software Update.
4. Tap Download and Install and deploy iOS 12 Developer Beta 2 over-the air as you do with any other regular software upgrade.

iOS 12 Developer Beta 2 Facts
During the brief testing period we noticed the following:
– As you know early betas come with increased battery drainage. This was valid for iOS 12 Developer Beta 1 too. This problem has been improved with this update.
– The Notifications menu in Settings receives a new toggle that allows you to turn ON/OFF Siri Suggestions for individual apps.
– Podcasts display chapters in iOS 12 and this feature has been enabled in this Dev Beta 2.

Tip: If you had enough testing iOS 12, you can downgrade to the latest iOS 11 public version my following the steps described here.