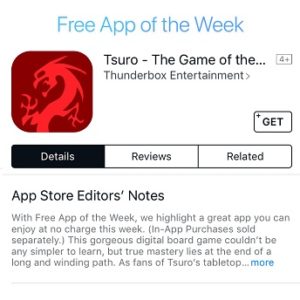 Apple has just announced the Free App of the Week 33! Tsuro can be downloaded free of charge during the next 7 days! Save $3 and grab this 5-star rated digital board game developed by Thunderbox Entertainment for iPhone and iPad. Pave the path for your stone and use as many tiles as possible in order to stay on the board longer than your opponent. Travel the longest distance and perform subtle tricks to earn bonus points.

Tsuro can be played in Single Player mode against AI (Artificial Intelligence) or using the more spectacular, online Multiplayer mode. You can even play against users outside of the iOS environment. The cross-platform connectivity is achieved by syncing with the user’s Facebook account. This captivating puzzler is pretty straightforward. It has a short learning curve that you can easily master after the initial demo game played against Calliope! 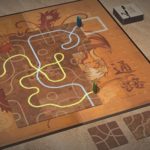 Download Tsuro Free On iPhone & iPad
To grab this Free App of the Week deal tap this link and you will be redirected to the official App Store page of Tsuro – The Game of the Path. There you have to tap on the GET label, available at the top of the screen. Next, hit INSTALL and be patient until the game is deployed on your iOS device. Tap the OPEN label when it becomes available to start playing!
Important: If the GET label is replaced by the $2.99 price tag it means that you arrived too late and the promotion expired. 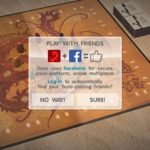 Tsuro Gameplay
A digital board is displayed on your smart device’s screen. Each player has to choose a stone and place it on the edge of the board. You’re practically selecting your starting point. It’s the place where your first tile will be placed and your stone enters play. Once in you have to keep it as long as possible within the boundaries of the map. Tiles are dealt to the players. Each tile contains numerous paths. Place them wisely in order to allow your stone to slide within the limits of the board. The tile placement is done turn-based, one tile for each player at a time.
Important: Your stone will travel on foreign tiles too. It will stay on it’s path until the trail runs out. This means that it can advance multiple tiles at a time.
Tip: Tap the available tiles to rotate them when needed. Drag & drop to place them on the map.

Fact: Last week Colorcube was the app that went free in this campaign. You can grab more discounts if you frequently visit our App Store Deals section!