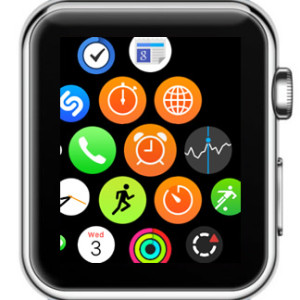 I really do appreciate the sensitivity of Apple Watch’s touch screen display and the way Watch OS reacts to our tactile inputs. However, no matter how precise the interaction with the wrist gadget is, failed taps will occur, from time to time. For example, when you’re attempting to open an application from the bundle, available on the home screen, it might happen if you’re in a hurry or not paying too much attention, and accidentally tap a wrong app icon.

Watch OS is there to help you out. You can rapidly return to the app bundle and redo your selection with the help of a simple but very efficient trick. The standard command to exit an app and return to the home screen is a single Digital Crown press. You can continue and press the same button once again the app layout will center on the Watch Face icon. However, here is a faster way to obtain the same result!

You do already know that an app can be opened from the home screen, by tapping its icon or by turning the Digital Crown, to zoom in, until the app situated in the center is accessed. Well, if you do the opposite you can rapidly exit an app. So, if you mistakenly open the wrong piece of software, turn the Digital Crown downwards and you’ll return to the app bundle. Do note, that you have to perform this gesture immediately after opening the app, else the trick won’t work, because the Crown will resume its standard scrolling function, or any other role that it plays within the specific application.

5 Other Watch OS App Closing Options
There are other ways to close an application that’s currently opened on your Apple Watch’s screen. Depending on the situation you can choose to apply the trick shown above or the following methods:
1. Digital Crown Press – As mentioned before if you press the Crown once you’ll exit the app and return to the home screen.
2. Digital Crown Double Press – Press the same button twice, back-to-back, and you’ll use the Apple Watch multitasking trick. It will switch Watch OS to the previously used app.
3. Side Button Press – Use the lower Watch button to jump to the Friend‘s carousel and reach one of your important contacts.
4. Force Close The App – If you wish to close the application and not just exit it, perform the force closing trick and prevent the app from running in the background.
5. Restarting Apple Watch – Go nuclear and force restart your Watch if the software jams and stops receiving your commands.