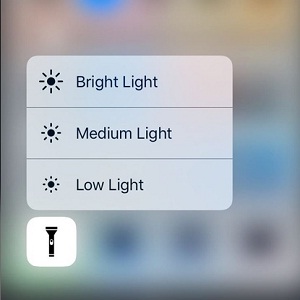 It’s the little things that make iPhones and iOS probably the best smartphone and operating system available on the market. In the past few weeks we’ve presented you some of the most important features coming with the iOS 10 release. Now, it’s time to highlight a small feature that might easily pass undiscovered, but could prove itself very useful in certain situations. In fact, I met a lot of iPhone power users that weren’t aware of it yet.

Starting with iOS 10, iPhones owning 3D Touch functionality allow you to tweak the flashlight brightness by force touching the Flashlight toggle, available in the redesigned Control Center. This action unveils a 3-option slider that includes the Bright Light, Medium Light and Low Light settings, allowing you to control the Flashlight intensity.

How To Edit iPhone Flashlight Brightness
Editing the Flashlight’s intensity via the native iOS app is available for the iPhone 6S, iPhone 6S Plus, iPhone 7 and iPhone 7S Plus models.
Step 1: Slide-up from the bottom of the iPhone screen to unveil the Control Center
Step 2: 3D Touch the Flashlight icon, available in the bottom-left corner of the iOS Controls. The first Control Center card.
Step 3: Slide your index finger above the desired Flashlight Brightness level and release the press.
Fact: Do you remember the Dynamic Flashlight knob introduced along with iOS 8?

iOS 10 Flashlight Intensity Editing Benefits
– If want to light up a room that hosts people which already sleep, the Low Light Flashlight setting might help you to avoid disturbing someone’s sleep.
– When your iPhone runs in Low Battery Mode, you can continue conserving power by using the Flashlight in the Low Light mode.
– iPhone 7 models come with an enhanced Flash unit. Bright Light mode will truly shed a bunch of light in your surroundings.
Tip: Did you know that you can turn the iPhone Flashlight On from the Apple Watch?

3rd Party iOS Flashlight Apps
The brightness setting is an option imported from 3rd party Flashlight apps available on the App Store. These still come with a series of features that aren’t yet built-in the native Flashlight app. Here is a list with some of the popular applications.
1. Flashlight – 4 in 1 (FREE) – This app turns your iPhone’s Flash in:
– Bright Led Flashlight with a continuous on feature and a pressure switch that allows you to quickly turn the light on and off to send messages and attract attention.
– Led Magnifier combines your Flashlight with a Zoom-in of up to 4x allowing you to study tiny things. The built-in Camera feature allows you to snap photos of what you see in the magnifier.
– Strobe allows you to choose your frequency and let your iPhone blink like dance floor stroboscope.
– Morse Code encoder and transmitter.
2. Flashlight (FREE)
3. iLights Flashlight (FREE)