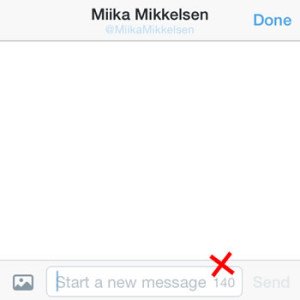 The popular social networking service has just performed an important update to its direct messaging feature. Twitter‘s trademark status updates and messages between users, also known as tweets were limited to 140 characters, since the founding of the platform, back in 2006. However, in an attempt to keep up with the facilities provided by competitors, the San Francisco-based company has decided to remove its length limitation for direct messages.

I’m referring to the messages exchanged, internally, between Twitter’s users. The 140 character status update limit is still in place! However, with the direct message restriction lifted, we could expect future changes for regular tweets too. The change is currently available for iOS, Android, Twitter for Mac and a few other official Twitter apps. It should soon spread out to the third-part Twitter apps too. 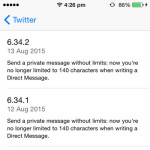 If you want to implement this major change on your iPhone, iPad or iPod touch, update the Twitter as soon as possible. Open the App Store app, on your gadget and browse to the Updates tab. Click Update All and the upgrade will be installed and configured on your smartphone, in no time!
If you don’t use Twitter yet, or you don’t have the app installed, download it now and start following your favorite celebrities, hook up with friends and acquaintances. The service is free of charge!

Fact: The new Twitter direct message typing limit has been set to 10,000 characters. That’s a huge increase, isn’t it? It will be interesting to see if the company is ready to introduce other features, in the near future. With video playback being on the rise, one would expect for them to reconsider this tendency and allow users to share media files too. We’ll have to wait and see!