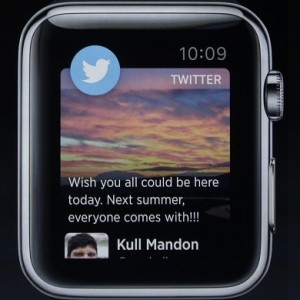 The first wave of apps which have rolled out updates to support the Watch, Apple’s latest gadget, has now reached the App Store shelves! Of course, that Twitter couldn’t miss the opportunity to make its iOS application one of the first that includes support for Cupertino’s wrist held gadget!
The news comes two weeks after Apple itself updated iOS to introduce the Watch to the public. Version 8.2 was rolled out March 10, 2015 and started the Apple Watch mania.
Twitter’s 6.24.4 release includes a few handy ‘gesture tricks’ like the option to share your location, a song or a status with just a flick of the wrist. Tweeting, selecting favorites and replying is also quicker.
More, now you can also use your iPhone’s virtual assistant on Apple Watch, to tweet on your favorite social media platform. Simply dictate the desired status via the Hey Siri feature and your message will be posted!

Twitter Apple Watch Update
If you’re a new iPhone user or you haven’t upgraded your device to the latest tweeting version, download Twitter for Apple Watch now! This popular social networking app is compatible with iOS 7.0 or later. The update package is 53MB big and rated 4+.