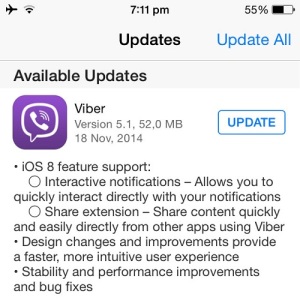 Viber Media Inc. has just released a new version of its popular instant messaging and voice over IP app (VOIP). It’s labeled version 5.1 and it’s 52,0 MB large. The big news is that Viber now includes iOS 8 support for interactive notifications and share extensions. This means that users are able to rapidly reply to conversations from the notifications screen, in a similar fashion as the iOS 8 built-in interactive notifications feature for iMessages and texts.

Sharing has also become more efficient because users can now easily share content via Viber when using other apps. Although these are the most essential upgrades, this release also includes important fixes and improvements that enhance performance. Design addicts will enjoy improvements which are welcomed both esthetically and practically, enhancing the app’s user-friendliness.

This Viber update comes exactly 24 hours after, direct rivals WhatsApp released their delayed iPhone 6 and iPhone 6 Plus support version. The Facebook-owned instant messaging app seems to have lots of ground to cover, because they’re yet to release extended iOS 8 support.

How To Update Viber
Upgrading this instant messaging app to version 5.1 is very easy. Tap this link and hit Update, when the official Viber App Store page opens. The same link works if you aren’t a Viber user yet, but wish to download and install the application. 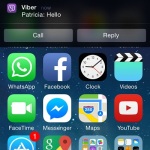 Viber Interactive Notifications
To use Viber interactive notifications you have to swipe down when the top screen banner alert unfolds. You’ll be prompted with two options: Call or Reply, as exemplified in the nearby image. Tapping on Call will initiate a voice over IP call, while the second option opens the Viber chat window. This differentiates Viber from the iOS built-in iMessage interactive notification feature, which provides options to directly reply from within the banner alert. 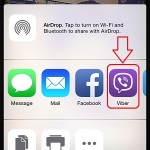 Viber Share Extensions Feature
The nearby image exemplifies how the new Viber iOS 8 support for share extensions is used. It considerably speeds up sharing of various files. Now, you can share a photo, with a Viber contact, directly from the app that you used for editing it. No need anymore to open Viber, select contact and attach image. To enable Share Extensions, tap on the Export button and swipe left on the app array, available for sharing, until you reach More. Tap it and enable Viber. Now, you can also drag the Viber icon towards the front of the activities list if you plan to use it often.