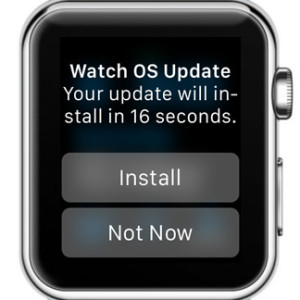 Exactly 26 days after the official birth of Apple Watch’s operating system, version 1.0 has just received its first tweak. The first ever watch OS update, labeled 1.0.1 comes with performance improvements and bug fixes. It also brings the new Emojis introduced with the iOS 8.3 release, as well as additional support for a series of countries like: Brazilian Portuguese, Danish, Dutch, Swedish, Russian, Thai and Turkish.

We’ve already installed Watch OS 1.0.1 on our smartwatches and have toyed with the gadgets. The first conclusions are that there is a considerable improvement in terms of app loading times. We noticed rapid data display for both native as well as third party applications. The Glances menu also loads much faster. Weather glance info almost loads instantly now! Swipes also feel smoother and more natural. Read on and find out all improvements and fixes.

Watch OS 1.0.1 Performance Improvements
Here is the official list, provided by Apple, with all improvements available with this software update: 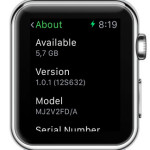 – Siri is more accurate and manages faster reply times;
– Stand activity measurement has been tweak and recorded data is not much more accurate;
– Calorie tracking for workouts like indoor cycling and rowing has been adjusted;
– Distance and pace data measured while walking and running has been improved;
– Overall Apple Watch accessibility goes up a notch;
– Third party apps connect better with the paired iPhone and are more stable. 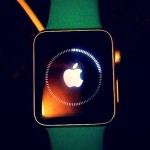 1. Conditions
You have to know from the start that you need to meet three hardware conditions to be able to upgrade your wrist gadget’s operating system:
– keep it within Bluetooth range and connected to the paired iOS companion;
– connect the smartwatch to the Magnetic Charger. It doesn’t matter if the battery percentage is 95%, the Watch has to be plugged in.
– updating will only start when the Watch’s battery is more than half full. 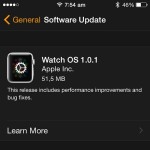 2. Update Process
– When the above conditions are met, open the Apple Watch app on your iPhone and browse to My Watch -> General -> Software Update. Allow your smartphone to search for the update. After it finds it, tap Learn More if you wish to check the update log.
– Next, tap on Download and Install and wait until the upgrade is downloaded and synced to the Apple Watch.
– After the download finishes, the wrist wearable is preparing for the installation. You’ll be prompted with a message informing you that the Watch OS update is about to start. Tap Install on your gadget’s display to skip the countdown and start the installation right away.
– Wait for up to 10 minutes until the update finishes. The Apple logo surrounded by a filling circle shows how much there’s left. Two rings have to be filled until the process ends. Apple Watch restarts and your software is now up to date! For more info also read how to update Apple Watch! 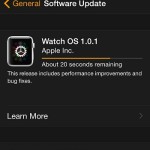 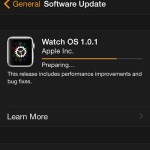 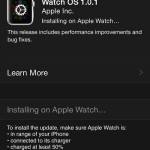 Watch OS 1.0.1 Upgrades
We are continuing to use the gadget and will update this section whenever we discover something new.
– Power Reserve Button: The Battery glance graphics has been tweaked a little and the Power Reserve button has now a green background too.
– Emojis: More emoticons become available when replying to messages. Swipe until the 4th Emoji slide and turn the Digital Crown to uncover hundreds of smiley faces.
– Motion Watch Face: Animated backgrounds (Butterflies, Flowers and Jellyfish) load faster when waking the Motion Face. Plus they’re more versatile and look more complex an natural.