watchOS 3.1.1 Beta 1 Brings Bug Fixes And Under The Hood Improvements 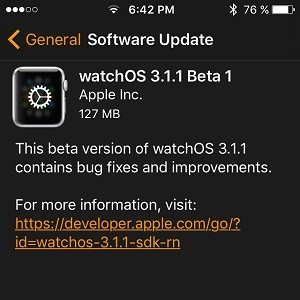 The upcoming Software Update for your Apple Watch will be labeled watchOS 3.1.1! We know that because Apple has started seeding the first Beta for this future release. This will be the second update since watchOS 3 was rolled out this September, along with iOS 10, and brought a wide series of known and unknown changes to the Apple Watch. Since then, a single update was released, one week ago. watchOS 3.1 did not bring any visible new features and focused instead on bug fixes and stability improvements.

We’ve downloaded and installed the new firmware on our Apple Watches and are now ready to share the conclusions with you. Contrary to the iOS 10.2 Beta 1 that came with a bunch of new features, we can’t report the same about the wearable. watchOS 3.1.1 Beta 1 comes with bug fixes and under the hood improvements. Low profile updates are common for delta watchOS updates, because the operating system isn’t packed with as much functionality as the iOS that powers iPhones, iPads and iPod Touch devices. 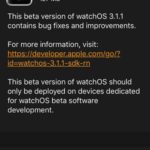 Apple still only seeds Developer Beta versions for your Apple Watch, which means that you have to own the Developer Beta Profile on your iPhone. Your smartphone has also to run iOS 10 or newer.
If the above conditions are meet you can open the Apple Watch app on the paired iPhone and browse to My Watch -> General -> Software Update. Allow your smartphone to search for the new firmware and tap on Download and Install when ready. watchOS 3.1.1 will be downloaded over-the-air as we any other regular update.
Tip: If you don’t have the iOS 10 Developer Beta Profile installed on your iPhone, the Apple Watch OS update won’t be found. If you’re a Developer grabbing the Profile is easy. If you aren’t you can sign up as one, but you have to pay a yearly $99 fee, or use this trick to download the Profile from a third party source.

Facts: This beta can be installed on all three Apple Watch versions. The original one, Series 1 and Series 2. It’s size is around 170 MB and the release note confirms that you should expect bug fixes and improvements.