Apple recently seeded iOS 10.1 to the general public after a series of 4 beta testing versions and, as expected, watchOS 3.1 followed closely after. The latest iPhone Plus flagship received Portrait Camera Mode, while all terminals benefited from Messages app changes, as well as a whole range of improvements that are available in the version’s full update log. Contrary, watchOS 3.1 doesn’t feature too many changes. It mainly focuses on bug fixes that aren’t detailed by Apple.

The only notable change to this first upgrade of the 3rd watchOS generation, is the Message effect Replay button that allows you to re-watch the full-screen and bubble animations on your wearable. WatchOS 3.1 comes after three developer beta versions. It’s iPhone counterpart, the iOS 10, was preceded by 10.0.2, 10.0.3 (only for iPhone 7 and iPhone 7 Plus). However, no matter how feature-less and update is, you should proceed with the upgrade as soon as possible, in order to make your Apple Watch more stable and secure. 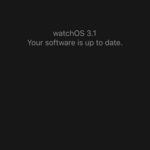 Install watchOS 3.1 On Apple Watch
1. Grab the paired iPhone, that is running iOS 10 or newer, and open the Apple Watch App,
2. In the My Watch tab browse for General -> Software Update and allow your smartphone to search for an update.
3. Tap Download & Install and allow your iPhone to download the new watchOS firmware, upload it to your wrist and install the new version.
Fact: Make sure that your Apple Watch is connected to the charger and its battery level is above 50%!

watchOS 3.1 Update Log
According to Apple this firmware upgrade brings the following changes and improvements:
– New option to replay bubble and full screen effects in Messages.
– Messages effect can play with Reduce Motion enabled.
– Fixes an issue that could pause the notification for Timer complete to be delivered twice. Resolves an issue that could prevent Apple Watch Series 2 from fully charging.
– Resoles an issue where Activity rings may disappear from the watch face.
– Fixes an issue that prevented Force Touch options from appearing in some-third party apps.