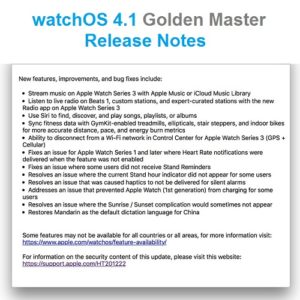 The first major update of the 4th watchOS generation is expected to be seeded by Apple any moment now. The Cupertino-based tech giant will roll out watchOS 4.1 along with iOS 11.1, tvOS 11.1 and macOS 10.13.1. Most of us expect the software update to become available just before or during the same day of the iPhone X release. The 10th anniversary iPhone can be Pre-Ordered on October 27, at 12:01 AM PDT and will be shipped and available in stores starting with November 3. So, this is the deadline for the above mentioned software updates.

Nevertheless, the watchOS 4.1 Release Notes have already been leaked. Guilherme Rambo has managed to extract them from the Golden Master version and published them on his Twitter account. Read on and see what’s new in this first major watchOS 4 iteration. Things can still change, but it’s unlikely for major new features to be included after the release of the GM.

Fact: There is no sign of the Apple Pay Cash feature in these notes, which means that the peer-to-peer payment system that runs over iMessage, won’t be included in watchOS 4.1 either, after already skipping the initial release.