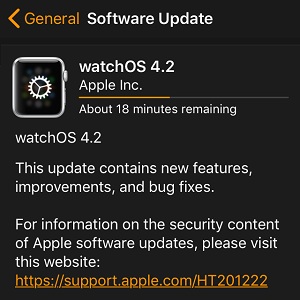 Apple has just started seeding watchOS 4.2, which represents the 2nd major update to the 4th watchOS generation that premiered in September, along iOS 11. The 2nd watchOS firmware comes in one month after watchOS 4.1, the firmware that enabled Apple Music streaming over LTE for the 2017 Apple Watch Series 3 models.

The main new feature in watchOS 4.2 is the much awaited Apple Pay Cash, person-to-person payment option via the stock Messages app. The service has gone live yesterday, with a delay of almost 2 months. Nevertheless, Apple has officially released it today along the roll out of watchOS 4.2. Apple Pay Cash is currently available only in the United States and gives users the opportunity of sending and receiving money via the iMessage system.

How To Upgrade To watchOS 4.2
This new firmware is downloadable over-the-air from the Apple Watch app available on the paired iPhone. To upgrade proceed as follows:
1. Make sure that your iPhone runs iOS 11.2. If it doesn’t, update it first as explained here.
2. Open the Apple Watch app from the home screen. Make sure that you’re on the My Watch tab.
3. Tap on General, followed by Software Update.
4. The watchOS 4.2 Software Update screen should load. Hit Download and Install, provide The Passcode, agree with Apple’s terms and be patient until the new firmware is deployed and installed on your wearable!
Fact: Make sure that the wrist-worn device has a battery level of over 50% and is connected to a power source.

watchOS 4.2 New Features & Fixes
– Apple Pay Cash: For more details about how to set it up and use it tap here. You might be also interested in the most common troubleshooting tips.
– HomeKit Support: Along the compatibility with the new peer-to-peer payment option, watchOS 4.2 also adds support for HomeKit enabled sprinklers and faucets, which allows user to control these home appliances directly from their wrist.
– New Workout Type: for the Apple Watch Series 3 which allows third party apps to track distance, average speed, number of runs, and descended elevation for downhill winter sports.
– Siri Weather Bug Fix: The Apple Watch won’t restart anymore if you ask Siri about the weather.
– Heart Rate Scrolling problem: has been resolved and now you can scroll with problems within the Heart Rate app.
– Simultaneous Timers Bug: has been patched. You can now dismiss each alarm or timer that is set for the same time. The glitch would silence all alerts in bulk.

watchOS 4.2 Release Notes
If you want to find out more about watchOS 4.2, here are its full release notes: